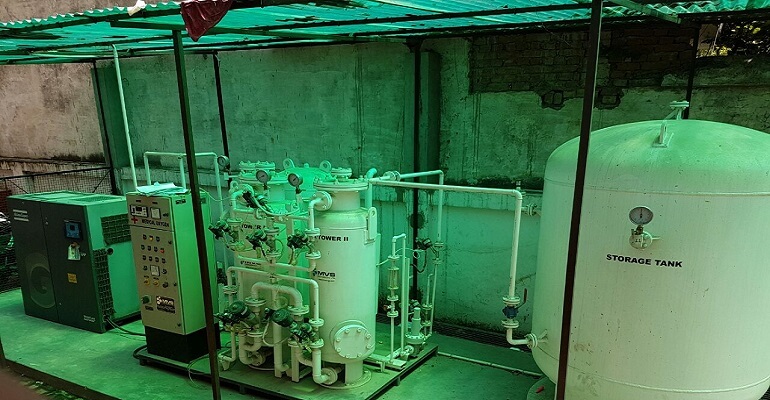 Oxygen plants are industrial systems designed to generate oxygen. In Phoenix Hospital, we use air as a feedstock and separate it from other components of air using pressure swing, adsorption or membrane separation techniques. Medical gas supply systems in Phoenix hospitals are essential for supplying piped oxygen, nitrous oxide, nitrogen, carbon dioxide and medical air to various parts of the facility. These systems are often monitored by various alarm systems, at the point of supply and in particular areas. Equipment is connected to the medical gas supply system via station outlets.

In Phoenix Hospital, Oxygen is used for patients requiring supplemental oxygen via mask. Here, it usually accomplished by a large storage system of liquid oxygen at the hospital which is evaporated into a concentrated oxygen supply, pressures are usually around 345-380 kPa (50-55 psi). This arrangement is described as a vacuum insulated evaporator (VIE) or Bulk Tank. Also, oxygen is usually supplied by a manifold of multiple high pressure cylinders.

Here, Medical Air is compressed air supplied by a special air compressor, through a dryer (in order to maintain correct dew point levels), and distributed to patient care areas. Sometimes, medical air can be supplied via high pressure cylinders. Pressures are maintained around 345-380 kPa (50-55 psi).

In Phoenix Hospital, Nitrous oxide is supplied to the various surgical suites for its anaesthetic functions during pre-operative procedures. It is delivered in high pressure cylinders and supplied through the Medical Gas system. Some bulk systems exist, but are no longer installed due to environmental concerns and overall reduced consumption of Nitrous oxide. System pressures are around 345 kPa (50 psi).

Here, Nitrogen is typically used to power pneumatic surgical equipment during various procedures, and is supplied by high pressure cylinders. Pressures range around 1.2 MPa (175 psi) to various suites. Like Nitrogen, Instrument air is used to power surgical equipment. However, it is generated by an air compressor (similar to a Medical air compressor) rather than high-pressure cylinders. Instrument air is becoming a popular alternative to Nitrogen. As with Nitrogen, pressures range around 1.2 MPa (175 psi).

Typically used for insufflations during surgery, and also used in laser surgeries. System pressures are maintained at about 345 kPa (50 psi). It is also used for certain respiratory disorders.

Medical vacuum in Phoenix hospital supports suction equipment and evacuation procedures, supplied by vacuum pump systems exhausting to the atmosphere. Vacuum will fluctuate across the pipeline, but is generally maintained around -75 kPa (-22 inHg).

Here, in Phoenix Hospital, many gas mixtures used for clinical and medical applications. They are often used for patient diagnostics such as lung function testing or blood gas analysis. Test gases are also used to calibrate and maintain medical devices used for the delivery of anaesthetic gases.